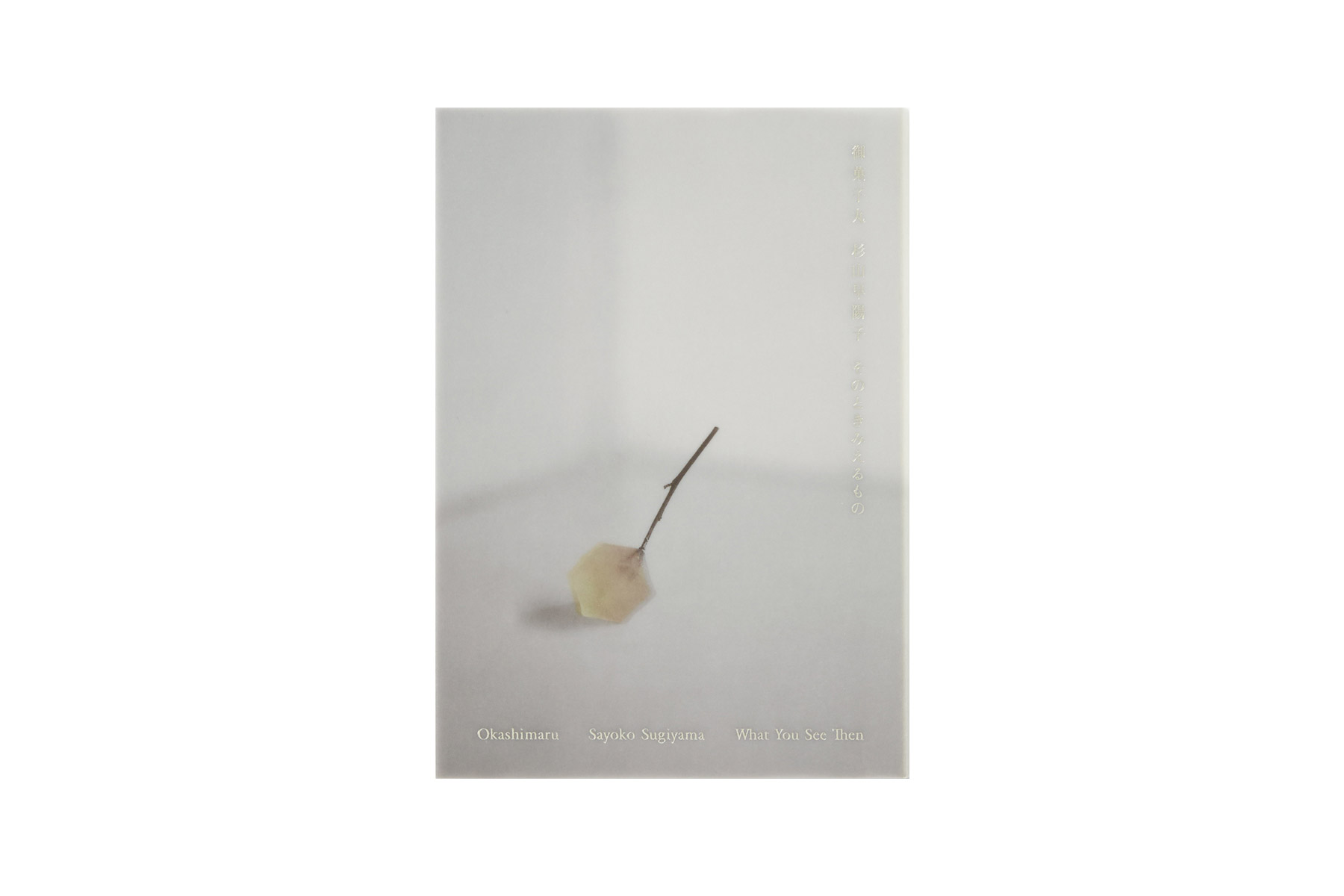 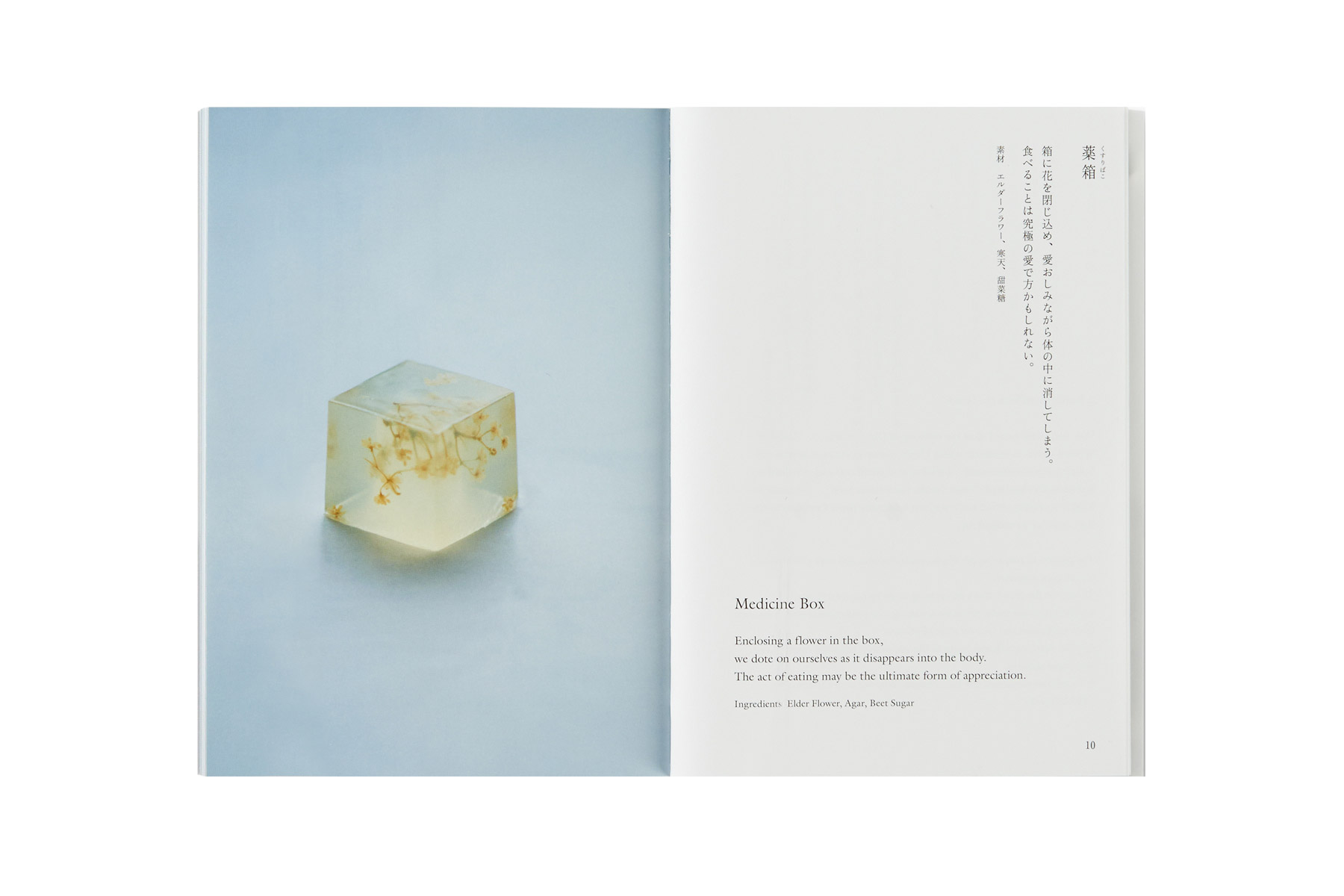 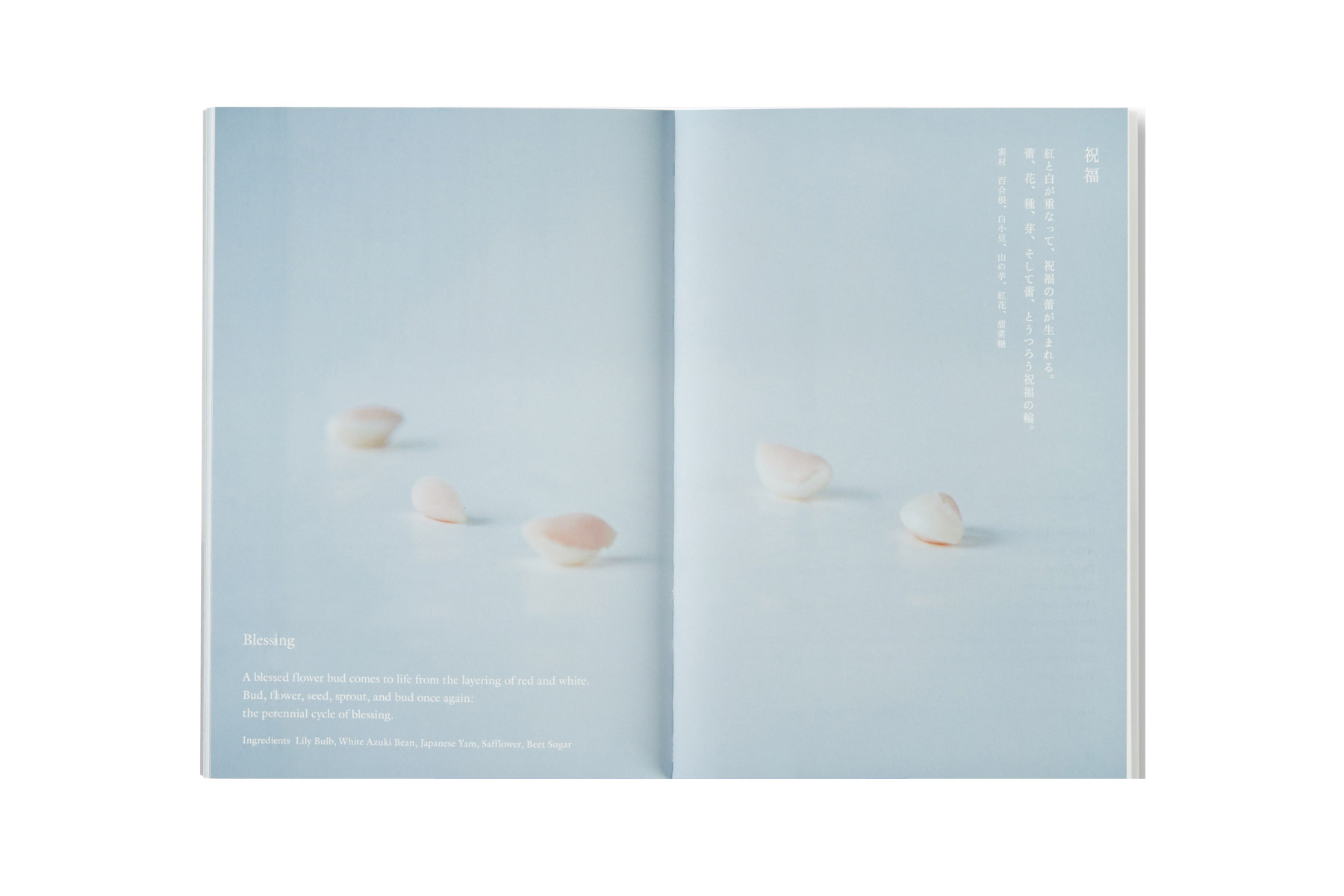 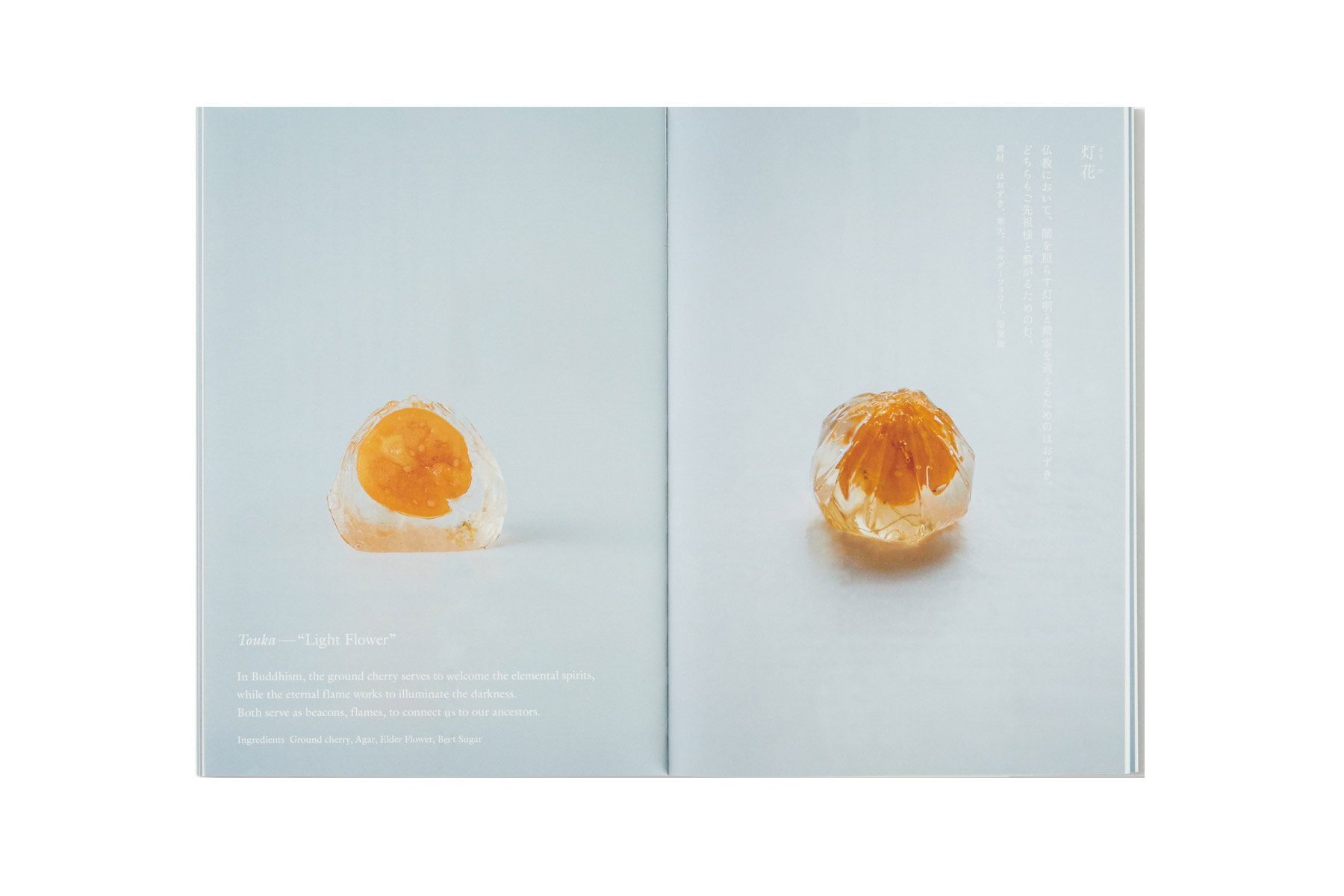 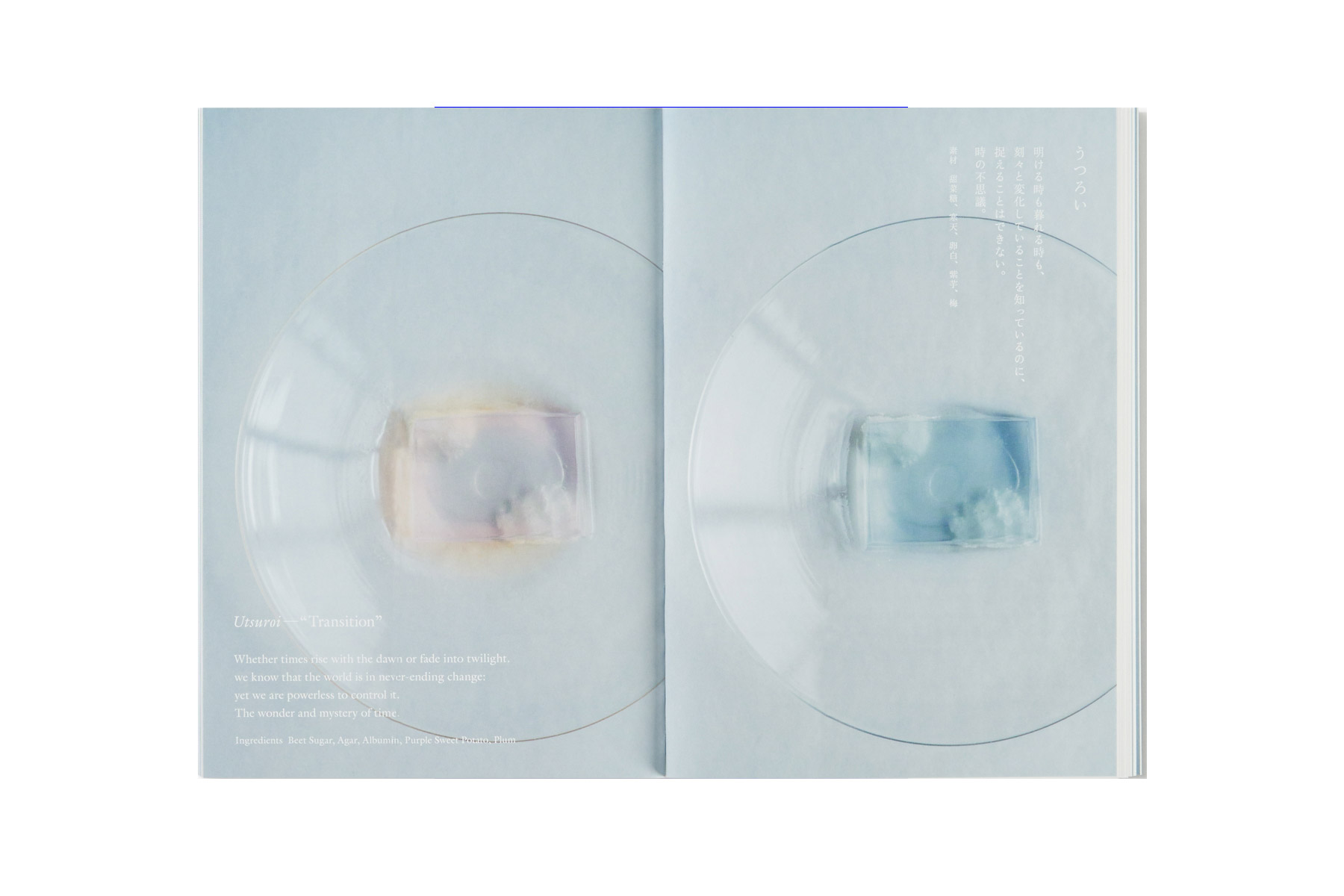 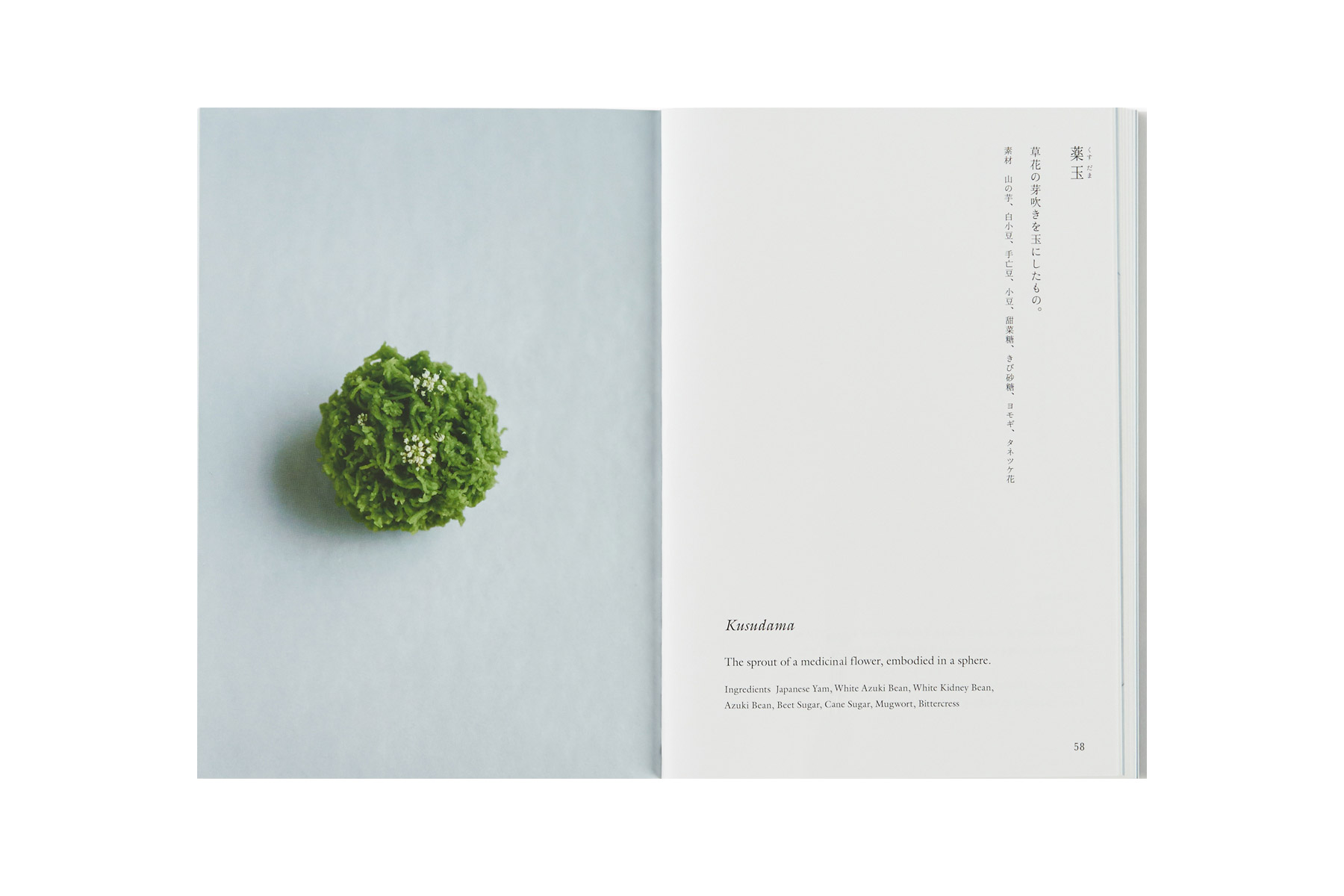 What You See Then

Wagashi, or Japanese confectionaries – they are miniature worlds that crystallize memories, sights, and notions and experienced through sight and taste. Sayoko Sugiyama, who operates confectionary shop Okashimaru out of Kyoto, condenses an intangible aesthetic sense into the form of these wagashi, and in doing so, stirs up a new wind of change within this traditional world of artistry.

Out of her treats is a creation that she entitles the “Fruit of Reminiscence,” which is crafted out of crystallized agar candy and stuck with a stick of lindera umbellata; it appears as if a tree has given way to a fruit, which is the confection itself. Sugiyama revisits the genesis of the craft of Japanese confection through the seed, attempting to use fruit as a material in its expression. Other confections include “Transition,” whose color begins to change over the passage of time; “Medicine Box,” born from the conception of embodying a scene in nature within a treat; “Touka – ‘Light Flower,’ ” in which she recreates a ground-cherry as a beacon, or lantern; and “Kusudama,” in which she depicts the sprout of a flower into an orb-like structure. Within these treats, we see Sugiyama mold her endearment for ephemerality, the realms of nothingness – or perhaps the quotidian, and the transitions of the seasons – into the forms of these confections. Such creations activate all of our senses in awakening the memory, and then continuing to accumulating within it.

Within this text, we introduce the 25 variants of confection that Okashimaru has created thus far, together with essays written surrounding each of the treats. We invite you to not only take a glimpse into the source of thought that bestows depth to the world of Okashimaru, but also to feast your eyes on these creations — ripe and fresh with an air of vitality.

Sayoko Sugiyama
Born in Mie Prefecture, Japan in 1983. Sugiyama is fascinated with the impermanence of food, and sensed possibility within Japanese confections (wagashi) as a way of expressing this: leading her to study the craft in Kyoto. She conceives the acts of enjoying with the eyes and eating to be a single, unified experience, and imbues the memorable spirit of these moments within her treats. Whilst managing her confectionary bland Okashimaru, she creates, showcases, and sells a variety of wagashi.
https://www.okashimaru.com/